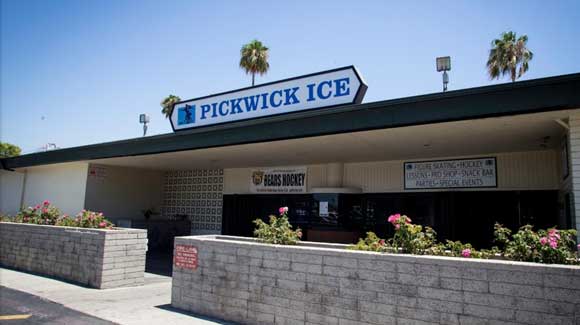 Burbank, CA (January 2, 2019) – The Los Angeles Kings and American Sports Entertainment Company (ASEC) are proud to announce the acquisition of the Pickwick Ice facility operations and a long-term partnership with Ron Stavert, CEO of Pickwick Gardens, and the entire Stavert family who have owned and operated the rink since 1961.

As part of today’s announcement, the facility will immediately be re-named LA Kings Ice at Pickwick Gardens with exterior and interior re-branding décor set to begin in June when the facility will temporarily shut-down.  ASEC at that time will help lead a three-phase alteration-and-improvement project — at a cost of approximately one million dollars — that will benefit the community including everyone who visits the new-look facility.

Pickwick Ice has been home to the Los Angeles Figure Skating Club, The California Golden Bears youth hockey club and countless skating enthusiasts for decades.  In addition to Pickwick Ice, the campus has a 24 lane state of the art bowling center, six full service conference and banquet rooms, and a two-and-one-half acre garden for guests to enjoy.

“We are excited to acquire the Pickwick ice facility business as we continue to invest in growing the game of hockey in Southern California,” said Kings President and Hockey Hall of Famer Luc Robitaille.  “We are thrilled to partner with Ron to build upon Pickwick’s strong youth and adult hockey tradition, including being home to the successful California Golden Bears youth hockey club.”

Said Ron Stavert: “The team at Pickwick Gardens is looking forward to our relationship with the Kings and ASEC.  They are venerable organizations who we trust to steward our ice facility and, more importantly, deliver world-class service to our customers.  We will now be able to focus all of our energy and resources on continuing to invest in our other businesses to ensure that Pickwick Gardens continues to be a premier recreation destination for future generations.”

“I truly believe that this is a great opportunity for our customers, coaches, employees and partners,” said Brad Berman, ASEC’s President and COO.   “Under the leadership of the Kings and ASEC and our best-in-class customer service and operating standards, we are confident that we can take the Pickwick Ice facility to the next level.  We will work closely with Ron and all of Pickwick’s constituents to effectuate a seamless transition.  We look forward to quickly making significant investments to upgrade its physical plant and enhance its customer-friendly environment for our figure skaters, hockey players and their families.”

Pickwick Gardens has been a thriving recreational and food service business for more than 60 years in Burbank.  The campus rests in the east end of the San Fernando Valley and is centrally located to the San Fernando and San Gabriel valleys and to Downtown Los Angeles.  The property sits surrounded by media giants including The Walt Disney Company, Warner Brothers Studios, Dreamworks Studios and Universal.

Founded in 2006, ASEC is the largest owner/operator of ice skating and indoor sports facilities in the United States.  ASEC owns and/or operates 21 facilities in New York, North Carolina, Texas, Arizona, and California, including the Toyota Sports Center in Los Angeles, which is home to the LA Kings, the Los Angeles Lakers’ state-of-the-art practice facility in El Segundo, CA, and the LA Galaxy Soccer Center in Torrance, CA.

The Los Angeles Kings are one of 31 current franchises in the National Hockey League.  The club began play in 1967 and in 2016 celebrated the franchise’s 50th Anniversary.  More than 650 men have played for the Kings, which has called STAPLES Center home since 1999, including Hall of Famers such as Luc Robitaille, Wayne Gretzky, Rogie Vachon, Marcel Dionne and Rob Blake.  The team has won two Stanley Cups – in 2012 and 2014 – and advanced to the Stanley Cup Final in 1993.  For all team information visit LAKings.com and call 1-888-KINGS-LA.