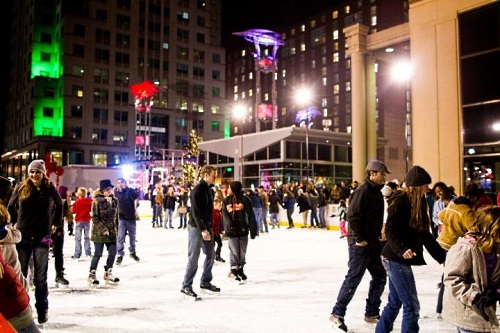 A new, larger (45 x 90 feet) outdoor ice rink will anchor AT&T Raleigh Winterfest, a two-month holiday entertainment extravaganza that will open December 4, 2010 with the Mayor’s tree lighting, a special visit from Santa, performances from local choirs, bands and dance companies, local crafters and artisans, in addition to Victorian carolers and carriage rides. The headlining concert performance will be announced at a later date. AT&T Raleigh Winterfest will conclude January 30, 2011, after the city hosts crowds for the NHL All-Star Game which will be played at the nearby RBC Center.

“We are thrilled AT&T Raleigh Winterfest was so well-received and will continue to attract residents and visitors from across the Triangle to downtown Raleigh,” said Mayor Meeker. “The opportunity to ice skate under the beautiful Raleigh skyline is a special holiday experience that adds to our vibrant downtown.”

“Downtown Raleigh offers the best in city living and entertainment as we continue to introduce more people to what we have to offer,” said David Diaz, president and CEO of DRA. “AT&T Raleigh Winterfest brings to life all the wonder of the holiday season to share with friends and family.”

Ice rink admission will be $8 (including skate rental) during regular hours. The rink will be open six days a week and closed on Mondays for private parties, which are open for booking now.

“The AT&T Raleigh Winterfest ice rink was one of the most popular outdoor rinks in the country,” said Randy Lee, Polar Ice House General Manager. “We are excited to work with the city, DRA and great sponsors like AT&T to make this an annual holiday tradition.”

For more information on hours of operation, directions and scheduled events, visit www.RaleighWinterfest.com.

About the Downtown Raleigh Alliance

The Alliance is the official nonprofit organization designated to manage and promote downtown as a regional center of commerce, tourism, and livability. Through its dedicated Board of Directors and professional staff, the Alliance team provides a comprehensive array of programs designed to build on the strengths of the downtown business district. The programs are categorized into five main areas: Clean & Safe Ambassadors, Marketing & Events, Economic Development, City Plaza Management, and Advocacy. The Alliance was created in 1996 by a coalition of community advocates, corporate leaders, and government officials. Our website is www.YouRhere.com.

About the Polar Ice House

Polar Ice House is operated by Polar Ice Ventures, with locations in Garner, Cary, and Wake Forest. It offers a wide variety of ice entertainment including: public skating sessions, birthday parties, track out camps, and learn-to-skate programs. Each location is equipped with the latest in hockey and skating equipment. For more information, please visit www.polaricehouse.com.